The Mac put the “personal” in personal computing, and changed my life in the process

Still have my original Mac, circa 1985

This week marks the 30th anniversary of the Apple Macintosh computer. I don’t think that it is an exaggeration to say that this humble machine changed my life.

For those of you unfamiliar with it, here are a few fun facts:

But it was still quite innovative in its time, with: 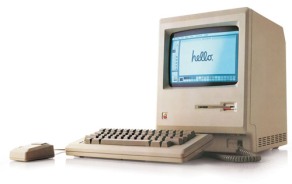 From an early Mac ad

It doesn’t look it now, but it was actually quite sexy back then. But why did this particular machine change my life? Well, first, I bought it my first year of grad school, January 1985. A critical time, to be sure. It was my first computer, and though I used it primarily for typing papers, it changed the way I understood technology and how it worked in everyday life. I don’t know if it was love at first sight, but I started a relationship that wasn’t like the one I had with my toaster or my alarm clock. It truly was a “personal” computer.

Professionally I became quite competent with MS-DOS computers, and programs like Lotus 1-2-3. But my first love was always there. In my first business as a computer consultant I used both systems side-by-side. I still remember using special software and a cable connection to copy Lotus files to the Mac so I could do 3-way sorts using MS Excel for Mac, before it was even available on the PC. I thought I was pretty cool, I guess…

Eventually I decided to focus on the Mac exclusively, despite the fact that it was even less ubiquitous then than it is now. My first company was called Human Technologies, and the logo was a Macintosh icon with a smiley face on the screen (no doubt a copyright infringement, in retrospect, but fortunately I remained well below Mr. Jobs radar. That company was never much more than a sideline, but it helped lead to a series of temp jobs, and eventually a regular gig doing admin for a prepress company’s desktop publishing division. All because I knew Macs…

After that came a stint as a Mac tech, after which my partners and I started what must have been one of the first Mac-based Web design and hosting companies in the Philadelphia area. We had a good run, but trying to host websites on a bank of mid-1990s era Macs was a challenge. But I think it’s safe to say that we had a lot of fun trying…

Apple was about to go through some tough times itself… with a shrinking market share and the post-Jobs strategy of aping IBM-clones. But then Steve Jobs returned triumphantly, and the glory days of Apple would begin a few years later; first with the iPod and iTunes Store, then the mobile phone that changed everything.

Strangely, I was slow to get on the iPod and iPhone bandwagons, though I’d always had a Mac as my primary computer. My first iPod was a 1G Nano, and my first iPhone was the 4. But now, when people hassle me for being an apple fanboy because of my MacBook Pro, iPad,  iPhone 5s, Apple TV, and even an old iPod Nano (I love the radio feature for NPR on the go), I have to tell them this long history.

Ok, maybe I am a fanboy… but I come by it honestly. Apple has always been there for me, and it’s co-founder has always been one of my heroes. And yeah, maybe I wasn’t there for the Apple II, let alone the Apple I, but I can’t imagine what my life would be like if I hadn’t seen that SuperBowl commercial 30 years ago this week, followed by an intriguing introduction by my first graduate stats professor.

So, happy 30th birthday, Macintosh! And they said it wouldn’t last… Here’s to 30 more years of thinking “different.”